Will The Metiria Turei Fraud Be The Last Nail In Labour’s Coffin?

It is never nice to see the public humiliation and ultimately the downfall of someone who is held up as a potential leader, but I think most Kiwi’s cannot understand why someone in a position like Metiria Turei would firstly commit fraud and more astonishingly think it was okay.

We know now from her own admission that the Greens co-leader Metiria Turei committed fraud. She admitted publicly that she lied to Work and Income as a young solo mother in order to receive more benefits.

What we don’t know yet is why she made a public statement admitting to fraud.

But she has admitted to claiming a benefit that she was not entitled to claim in a letter (below) earlier this week. 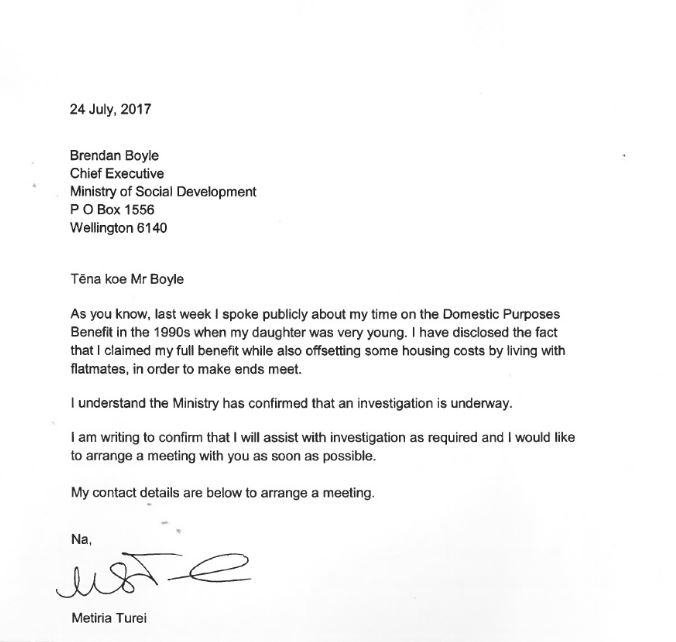 Was Metiria Turei About To Be Exposed?

My guess is Metiria Turei was about to be exposed for benefit fraud.

Of course I have no proof that this is the true reason, but it’s the only thing that makes sense to me.

As the co-leader of the Green Party, and the fact that her party has entered an agreement with the Labour Party you would expect that their party spin doctors would have handled this differently. Maybe they would have let Metiria Turei exit the party gracefully before the fraud case became public and potentially ruined the election for both the Labour Party and the Green Party.

But instead Metiria Turei went public to admit to committing fraud which is a criminal offence.

Then in an unbelievable move instead of showing remorse Metiria Turei wants an amnesty for beneficiaries who have broken the law so they can come forward without fear of being punished and her co-leader James Shaw has said he was not worried the fraud revelations would hurt their party’s chances at September’s election.

When I first heard this I thought it was a joke … but they were serious!

“My dream is every New Zealander, no matter what ethnicity, religion, sex, age or background, being treated with dignity and respect.”

Raised in a working class Māori family in Palmerston North, Metiria’s parents were “always generous, no matter how sparse the resources”.

After becoming a single Mum at 22, Metiria realised she needed a career that would set her up well to care for her daughter.

Using a training incentive allowance, she put herself through law school, graduating in 1999 from Auckland University and going on to work as a commercial lawyer at Simpson Grierson.

She fails to add that no matter what ethnicity, religion, sex, age or background of the New Zealand tax payer, I will steal money that was meant for others and use that money to benefit myself and my daughter while those same tax payers are providing a training incentive allowance to help me through law school.

I think the Green Party have gone nuts!

Instead of be ashamed Metiria Turei now wants an amnesty for beneficiaries who have broken the law so they can come forward without fear of being punished and her co-leader James Shaw has said he was not worried the fraud revelations would hurt their party’s chances at September’s election.

Is this the message that leaders of any political party or organisation should be presenting?

Fraud is theft but it’s okay to steal from others. Those taxpayers who are also the people that vote are fair game and it’s okay to steal from others. Don’t bother paying tax, forget about paying for parking and your rent. In fact why don’t you go and take your neighbors television and car … it’s just stealing from someone and that’s okay… REALLY!

I would have thought that at a minimum Metiria Turei would have been stood down until this was investigated.

Where Does This Leave The Labour Party?

Not in a good place that’s for sure.

The Labour Party obviously thought that an alliance with the Green Party was going to give them more strength; however they are now busy trying to distance themselves from The Greens.

Newshub reported that Labour deputy leader Jacinda Ardern has sought to distance her party from the Greens following Metiria Turei’s welfare fraud admission which is a smart move, but is it too little too late?

She went on to question Ms Turei’s lack of remorse and the perception she might be endorsing fraud.

She made it clear to the host Duncan Garner that the Greens and Labour are “independent parties” with their “own political platforms and our own policies” and I’m guessing this was not what the Labour Party were thinking of when they came up with their new slogan “it’s time for a fresh approach”.

It’s obvious from the polling that the Labour Party has virtually no chance of forming the next Government without the help of the Greens and New Zealand First, but do they really want to be associated with the Green Party now?

Will the Metiria Turei fraud be the last nail in Labour’s coffin?

This is my personal blog and my personal opinions based on public information and my understanding of what is acceptable in society. The number in the picture is not a criminal reference to Metiria Turei for benefit fraud or any other charges that she may face.