Why You Should Get Involved In Politics

New Zealand is known as one of the best examples of  democracy in the World today.

We all have the ability to elect a Government and the election process is fair – your vote counts just the same as mine or anyone else’s.

Almost all general elections between 1853 and 1993 were held under the first-past-the-post voting system, but since the 1996 election, a form of proportional representation called mixed-member proportional (MMP) has been used.

Under the MMP system each person has two votes; one is for a candidate standing in the voter’s electorate and the other is for the political party.

There are a number of political parties that someone can vote for;

NZ Labour Party – The New Zealand Labour Party (Labour) is a centre-left political party in New Zealand. The party’s platform programme describes its founding principle as democratic socialism and promotes itself as the working mans party.

New Zealand First – New Zealand First (NZ First) is a nationalist and populist political party founded by Winston Peters and since MMP was introduced has used it’s small voter base to influence which of the major parties can govern, and then used the limited number of seats that they have to strategically vote within the parliamentary system.

The Māori Party  – is an indigenous rights-based political party in New Zealand.

Sustainable New Zealand – this is a new political part being launched saying it is time for a new political party that champions a politics of sustainability.and they are currently looking to build the membership to 500 as needed so they are able to register as a party.

In New Zealand you can become a member of any political party, and in fact can be a member of more than one party.

You can view all the registered political parties here.

The Benefits Of Party Membership

It is common knowledge that the National Party has the biggest membership of any party in New Zealand.

They say when you join the party you have the opportunity to put your values into action.

When you are a member you get to hear what the party is doing and how they are reacting to things happening within Government and politics in general. You are emailed information and can attend meetings and other events where you hear from the members of Parliament and other party members and supporters.

So you get to hear what is really happening without the media’s interpretation.

What Party Should You Join?

Everyone is different and when it comes to politics they will have different ideas and values.

I personally think that a vote for one of the two largest parties is safer as you know that they will both have a substantial voter base at the next election, whereas voting for a smaller party may be wasted if they do not get a minimum of 5% of the votes or have a member elected.

You can join more than one party too.

Personally I believe more in what the National Party offer and believe that they have some very good people involved within the party, so I am a member.  I have also put my name down for membership of the new party Sustainable New Zealand because I believe in what they stand for.

I know a lot of people that support the Labour Party and can understand their reasons; however the current direction and leadership of the party is not helping the country economically or environmentally so I could not support them.

In my view the Green Party is no longer about environmental policy and is more a socialist party, so for that reason I am looking forward to seeing how then new party Sustainable New Zealand gets on.

Furthermore I could not bring myself to vote for NZ First as I do not trust Winston Peter’s and find that the way Shane Jones acts with total recklessness with our money is appalling.

If you agree with me then you should join the National Party and also support the new party Sustainable New Zealand. 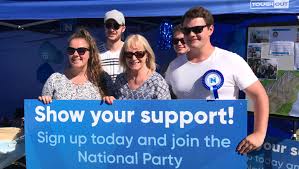