I Wanted To be A Pirate As A Boy

Today most of us think of pirates as the Robin Hood of the sea, unaware of the reality.

Yes, most boys like pirates … even though they are really criminals.

This might seem a bizarre post, but the reality is that not all posts on a blog need to be too serious and instead occasionally you will find something a bit different that you want to share … this is a little different!

But then again we can relate anything to business too.

These days pirates are just a fun dress up idea and people make fun of them.

Question: How does a pirate make his fortune?

Question: What is a pirate’s least favorite vegetable?

Answer: Leeks … as in leaks

There Is An International Pirate Day

Believe it or not, International Talk Like a Pirate Day (ITLAPD) has been in existence for 19 years. On 19 September 1995.

John Baur (Ol’ Chumbucket) and Mark Summers (Cap’n Slappy) from America proclaimed the day should be marked where one and all would talk like a pirate.

CLICK HERE to visit the one and only, official, accept-no-substitutes International Talk Like A Pirate Day Web site.

The Pirate Crawl, where enthusiasts dress in pirate garb and gather for merriment.

CLICK HERE to see what this is all about too.

Ahoy   Of course we all know this one – “Hello”.
Avast!  “Stop! Give attention!” This term can be used when surprised.
Aye!    “Yes, I absolutely agree.”
Aye aye! “I’ll get on that, as soon as my break is over.” Typical conversation is “aye aye captain”
Arrr!  Not to be confused with “Arrgh!” Arrr! can be used for most things. “Yes, I agree,” I’m happy,”

Beauty  This is how a pirate would address a woman, for example, “C’mere, me beauty.” Kiwi’s use the same term for a car or other item; “she’s a beauty”
Grog  An alcoholic drink – usually rum diluted with water – but use this term freely for any beverage you want. Water aboard ship was stored in slimy barrels so rum was added to a sailor’s water ration, to kill the rancid taste.
Lubber (or land lubber). A seaman would refer to someone who would not go to sea as a “lubber” (land lover.) It’s possible you are a lubber for most of the year, but not if you’re talking like a pirate. You can use this term as an insult.
Smartly This means do something quickly; “smartly does it lad” 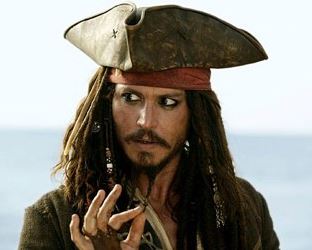 Pirates In The Movies

There are a number of movies that use pirates as the hero’s – not criminals.

The image of the classic pirate in the movies has little to do with reality. Most of them spent their life at sea, suffered from severe nutritional disorders, and died young.

But What Is A Pirate?

The definition of a pirate is someone who commits robberies (acts of piracy)at sea, usually without being appointed to do so by any particular nation, and while most of use think of pirates in the era of sailing ships, unfortunately piracy is still commonplace around the world today. Piracy has shifted from its original purpose of stealing to include kidnapping of people for ransom, sabotage, seizing of personal objects (rather than cargo), and murder.

In recent years, there has been a resurgence of pirates in areas of political unrest.

You may be shocked to see the number of acts of piracy and where they happen.

This map shows all the piracy and armed robbery incidents reported to the IMB Piracy Reporting Centre.

Luckily for most of us the thought of pirates is a fun person like those we see in the movies, or those from childhood books. We are not exposed to the continuing acts of piracy that happen around the world today.

We are more likely to hear about acts of piracy in the form of internet piracy; downloading movies or music.

Piracy Is Bad For Business

Often we hear people saying that for someone to copy them it is the highest form of flattery; however in business people spend a huge amount of time and often money to create products so to then have someone copy that without your permission can be devastating.

But it happens all the time.

In my role as a mortgage broker I have developed systems and processes that I use with clients to help them pay their mortgage off faster. It is my debt reduction system and we are in the process of making this available online for people.

The risk and challenge for me is to have the system developed and released while still retaining the intellectual property that makes this a unique service offering. If we can price this well and make available to other mortgage brokers then we should be able to make it a viable option for people, but we know that other mortgage brokers will try to copy us – it is just a fact of life.

Mortgage Advisers … Your Personal Shoppers For A Home Loan

Get Business Finance That Will Work To Fund Growth in 2021

Get Mortgage Advice Before You Start Looking At Properties