My name is Stuart Wills and I’m a short bald man that loves winning in business, loves watching and getting inspiration from sport and of course enjoy fishing too.

In business the measure of success is dollars, in most sports it is the scoreboard and with motorsport it is the chequed flag.

I am also a New Zealand mortgage broker who is only paid on success – therefore I do not like failure.

But motorsport is another passion…

I was therefore interested in the 84th running of the Le Mans race which is arguably the greatest motorsport event in the world.

For 23 hours and 57 minutes, this year’s race belonged to Toyota Gazoo Racing, but the race is a 24 hour race – the car came to a halt just past the finish line with three minutes still on the clock due to what is reported as a turbo failure.

Of the 1440 minutes they were on target for winning for 99.98% of the race, but they did not cross the finishing line, so a non-finishing any race means a failure.

This is something that we learn from motorsport – to finish first, first you must finish. 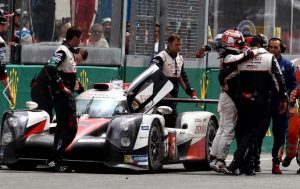 Okay, so in New Zealand we may not know much about the Le Mans but according to Motorsport.com it is the most important race.

Listed in importance are;

Was This A Success Or Not?

A non-finishing in any race or competition means a failure.

There is no other words for it.

Some “PC” people will be “nice” and refer to these failures are “learning experiences” or a “good effort” but to most competitors anything other than a win equals a loss or a failure,

Success is therefore very important to me.

How Does This Relate To Business?

I know plenty of businesses that strive for mediocrity.

Is that going to be satisfying?

Ask yourself what you are in business for, and also consider how much better you could be doing if people raved about you.

Of course many trades people are “flat out” at the moment and therefore are not concerned about customer service, but there will no doubt became a time when they need to work for business and then reputation and client satisfaction becomes important again.

Will they have customers lining up then?

What Do You Consider Acceptable Levels Of Service?

I listened to the CEO of Air New Zealand a while ago and they have a non-negotiable 100% success target and really it is not a target. They cannot afford to have planes falling out of the sky and air travelers have choice so they need to perform.

The Auckland rail system claim to have delivered 96.3% on punctuality which is interesting since I have taken trains four times in the last 12-months and twice (50% of the time) the trains have runs late.

Many businesses are not quite as focused on delivery times, but maybe they should be.

In our business as mortgage brokers we know that people can and often do go directly to a bank, and many do for their home loans.

They get what they think they want – they know nothing different.

What they probably will not get is (1) a good loan structure, (2) the best interest rates and (3) the advice needed to ensure they pay their home loan off faster.

We are also often told that our advice extends beyond the basic finance and that adds a huge amount of value.

As mortgage brokers we go beyond what a banks staff tend to do and we work for the borrower not the lender.

Why Deal With The Mortgage Supply Company

My name is Stuart Wills and my aim is to get things 100% right for people, so if you know people that are happy with a 99% success (or less) then they might be happy to deal directly with the bank, but if they want to work with someone who aims for 100% success every time then maybe we should be talking.

I have learned a lot of business lessons from life, fishing and of course from motorsport.

About Home Business My Business Blog

How Do You Manage Social Media For Your Business?