I have just arrived back in Auckland on Sunday after a quick stop-over in San Francisco thanks to the fuel issues in New Zealand.

Just One Day In San Francisco

We had been having a vacation in the USA and were due to return from Houston; however our Air New Zealand flight was cancelled and so we were flown the 6-hours to San Francisco then 24-hours later we were back on the plane for the 13-hour trip to Auckland.

But we’re not complaining … we really enjoyed the short amount of time we had in San Francisco and will most likely plan to return for a better look.

Of course we did a trip on the water to check out the Golden Gate Bridge and Alcatraz Island, we rode the Cable Cars and visited Lombard Street. We also visited Pier 39 and saw the resident Sea Lions and had Crab for lunch … but this was all just scraping the surface. 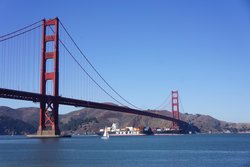 The City Was Interesting

We had a very good taxi driver and got talking about the city plus had done some of our own research. In many ways Auckland could learn from San Francisco, but there are a number of similar problems too.

Of course being a mortgage broker in New Zealand I look at cities a bit differently to some people, but here are a couple of my observations.

House Values – people are complaining about house prices in San Francisco in the same way they do in Auckland; however like Auckland it’s now being reported on Bloomberg that “San Francisco, which in recent years had the biggest home-price gain in the U.S., was the country’s weakest market in the first quarter, with values falling for the first time since 2011” after the area’s median home price in the first quarter was $1.3 million in April.

Our taxi driver commented on how expensive some area’s of the city were; however also said it was better to buy than rent.

Traffic – it’s reported that San Francisco commuters spend an average of 83 minutes in traffic and like Auckland the motorways were busy due in part to the landscape and harbour which means people are forced to build roads to fit within those confines.

Population – of course the San Francisco Bay area has a larger population than  Auckland with  almost 7.7 million people in the city and surrounding areas compared to just under 1.5 million in Auckland. The common issue is the rate of population growth and therefore the pressure on infrastructure.

These may be the negative aspect of living in a growing and vibrant city.

Which City Is Better?

I always tend to compare places I go with Auckland and New Zealand and to be honest it’s hard to beat Auckland as a place to live.

Sure, we have the same issues to  a greater or lesser degree as most vibrant cities, but with some planning and time many of these can be improved. While many Kiwis think of Auckland as a big city with expensive houses and traffic issues, a city like Auckland has a lot of positives too with plenty of parks and beaches, a good range of activities and things to do, some quite good shopping and business opportunities and generally a nice climate.

If Auckland had a bigger population then we would expect to see more business and lifestyle opportunities, but many Kiwis prefer to slow down growth.

So we compare Auckland with San Francisco and my  money says Auckland is a better place to live, but I’m still keen to visit other cities and there is plenty that we can learn from them too.

Why Inflation Must Be Controlled In 2022

Why You Should Refix Your Home Loan With An Adviser

Are Your Bank Statements Ready For A Mortgage Approval