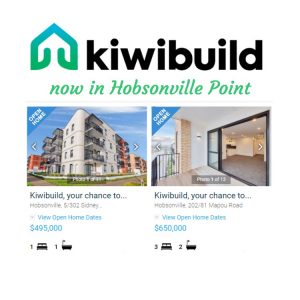 We now have some KiwiBuild homes available in Hobsonville Point.

While Hobsonville Point was the birthplace of the affordable home concept with AXIS Homes, this week we have seen the first of the KiwiBuild homes be listed.

They are apartments within the Bernoulli Gardens complex which are advertised as one, two and three bedroom apartments ranging in size from 55 square metres to 94 square metres and priced from $495,000 to $650,000.

This is a development that was completed last year and it looks like the last of the apartments have been offered as KiwiBuild homes. 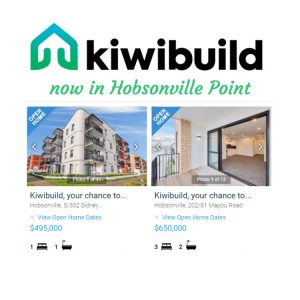 On the developers website it shows all the apartments have been sold, so the ones offered as KiwiBuild look to be the only ones available.

Stuart Wills says the people that he knows that live within this complex are quite happy there.

The apartments appear well build and it’s a nice place to live.

If you have followed the news stories then you will know about the struggles that KiwiBuild have had.

According to the Labour Party at the last election, KiwiBuild was the answer to the housing crisis. While most references to KiwiBuild on the parties website have been removed you can still read about the promises stating that Labour will partner with the private sector to build 100,000 affordable homes over ten years for first home buyers with apartments and terraced houses in Auckland priced under $500,000.

Today on the KiwiBuild website they claim to have completed 230 homes.

We do not know how many of those are “extra” to what was already being built, or properties like these apartments that were finished last year and seemingly unsold, so branded marketed as KiwiBuild homes now.

As mortgage brokers that specialise in new builds we get asked about KiwiBuild homes and if they are good value.

Most are reasonable value, but nothing special and in the current market some may seem a little expensive.

We have had a recent example where the property valuer did value the new home below what the price being asked by KiwiBuild. The valuer used comparable sales as the basis of their decision, so we can only assume that they genuinely believed that the KiwiBuild home was over priced in that market. The developer then provided the valuer evidence of sales within the same development and which had not been made public at that stage, and with that information she was able to alter the valuation to match the sale price.

This example was not in Hobsonville or even West Auckland, but it does highlight that values can be contentious.

Value is something that only you can determine.

If you like the house and believe that it is good value then that’s good. In most cases with new builds the bank will want a registered valuation which will confirm if the home that you have selected is valued at what you have agreed to pay.

The one good thing about KiwiBuild homes is the finance available.

When Labour won the election and therefore were able to start KiwiBuild the banks saw an opportunity to provide mortgages to 100,000 homes.

They decided that they could offer a better home loan than was typically available for first home buyers who might have less than 20% deposit, and so they all started offering discounted interest rates and cash incentives.

Obviously KiwiBuild has not produced anywhere close to the number of houses and therefore mortgages, but some banks are still offering better deals on KiwiBuild homes.

First Home Buyers With Low Deposits Consider The Co-Ownership Concept A lot of Kiwis have not heard of the co... Read More

Don’t Let The Banks Link Your Properties When you own more than one property the bank will want to link... Read More

Top Auckland Mortgage Brokers Look At What Is Important Today

Top Auckland Mortgage Brokers Look At What Is Important Today Some of the top Auckland mortgage brokers are starting to... Read More

How Low Will Mortgage Rates Go In 2020? As mortgage advisers one of the most common questions that we are... Read More

What First Home Buyers Need To Think About Before Applying For A Loan Buying your first home is not easy... Read More