Did you know that daylight saving was a Kiwi idea?

I didn’t until I decided to see what the history of daylight savings was.

Who Thought Of Daylight Saving Time?

The idea of daylight saving was first conceived by Benjamin Franklin as far back as 1784 but never progressed.

In 1895, New Zealand scientist George Vernon Hudson presented a paper to the Wellington Philosophical Society, proposing a 2-hour shift forward in October and a 2-hour shift back in March. There was interest in the idea, but it was never followed through.

Ten years later and independently, British builder William Willett (the great-great grandfather of Coldplay frontman Chris Martin) independently hit on the idea while out horseback riding suggesting setting the clocks ahead 20 minutes on each of the four Sundays in April, and switching them back by the same amount on each of the four Sundays in September, which was a total of eight time switches per year. He proposed it to England’s Parliament as a way to prevent the nation from wasting daylight. His idea was championed by Winston Churchill and Sir Arthur Conan Doyle—but was initially rejected by the British government. Willett kept arguing for the concept up until his death in 1915.

However, the idea did not catch on globally until clocks in the German Empire were turned ahead by one hour on 30th April, 1916 making Germany the first country to really adopt daylight savings. This was 2 years into World War I in an effort to minimize the use of artificial lighting so as to save fuel for the war effort. Soon after this, England and almost every other country that fought in World War I followed suit.

That’s a small lesson in history about daylight savings. 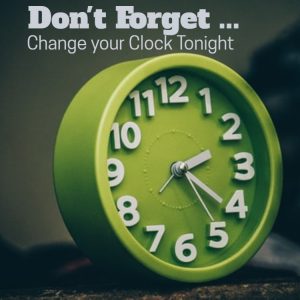 Daylight Saving Time is now used in over 70 countries worldwide and affects over one billion people every year and while most of us accept it, some people are against the idea. On March 26, 2019, the European Parliament voted in favor of removing daylight savings time in the European Union (EU) permanently.Under the new directive, each Member State will have to decide until April 2020 whether to remain permanently on “summer time” or to change their clocks back one final time to permanent standard time.

The beginning and end dates vary in different countries due to seasons etc but clocks are almost always set one hour back or ahead.

There are always going to be exceptions and on Lord Howe Island, Australia, clocks are changed by 30 minutes.

Hope you have learned a bit today too … oh, and don’t forget to change your clock

About Life My Blog

How To Do A Good Spring Clean On A Budget

Find New Opportunities In 2018 With No Excuses Or Blaming Others

How Long Is Ninety Mile Beach?

Stuart Wills
About Life My Blog